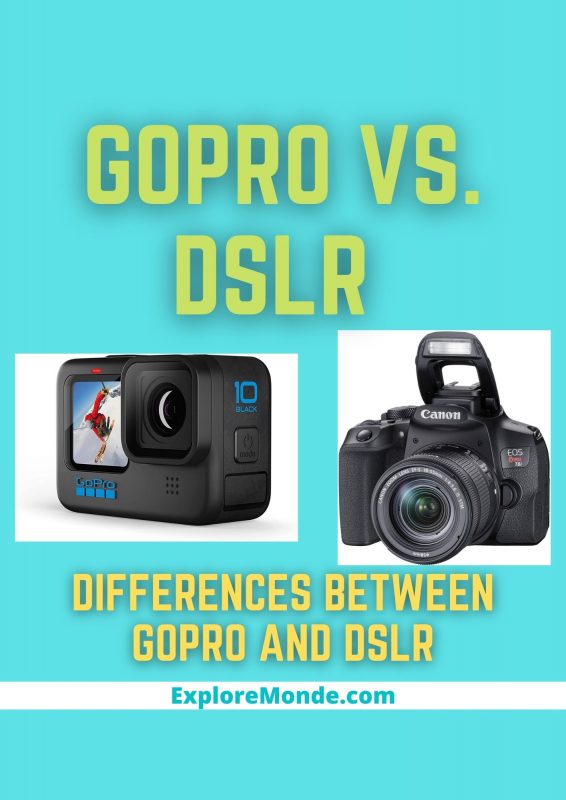 Have you ever been confused about the differences between GoPro and DSLR while making a purchase of your next new camera? Well, both of these cameras were made for totally different purposes. While buying one, you should consider all pros and cons of both the cameras. Depending upon their usage, their characteristics differ.

In this article on GoPro vs DSLR, we shall cover all the differences between GoPro and DSLR cameras.

GoPro vs DSLR: A Key Difference Between GoPro and DSLR

A key difference between GoPro and DSLR is their purpose. GoPro is specially designed for capturing extreme actions whereas DSLR is made to shoot professionally, especially photographs.

Even though DSLR can be used for videography to a certain extent, it cannot match the videography level of GoPro. On the contrary, GoPro can not be used for effective photography as compared to DSLR.

Differences Between GoPro and DSLR in Tabular Form

In simple words, GoPro is an action camera that was created to capture extreme-level action while keeping the frame stable. Its wide-angle lens lets you capture as much as possible. These compact, very tough action cameras provide outstanding video and audio quality and may frequently be found for a very low price.

GoPro offers a great variety of action cameras from FPVs and GoPro 360 to Drone pilots. With every newly added camera in the series, GoPro offers better stabilization, better color, and other added features, making it more and more likable by adventure lovers!

This is the most successful and popular camera series out of all GoPro cameras.

One of the main differences between GoPro and DSLR is mounts. GoPro comes with more than 45 mounts including hand gears, headgears, car mounts, bike gears, and so on. These mounts make it extremely easier for adventurers to capture moments and nothing is missed.

You can buy these mounts from Amazon. This kit has almost all the mounts and straps that are compatible with all GoPro cameras- both newer and older versions. These can be used by any body shape and size and for any extreme adventure activity such as surfing, skateboarding, parachuting, and bungy jumping.

DSLRs are specially used for professional photography, but newer models can shoot in 4k resolution as well. There are several brands that manufacture DSLRs and are deliberately popular in the market showcasing their unique features.

Here are a few DSLR cameras along with their features.

This camera is considered one of the best Canon DSLR cameras with a 30.4 Megapixel full-frame CMOS sensor.

Nikon D850 is one the best of Nikon DSLR cameras. It’s a camera with 45.7 megapixels of outstanding quality that allows photographers to record quick action. All of its features are just extraordinary and the best thing about this camera is- it’s weatherproof!

Panasonic’s Lumix brand manufactures a wide range of cameras, from point-and-shoots to DSLRs and mirrorless cameras. In partnership with Olympus, the business is notable for standardizing and developing the Micro Four Thirds (MFT) system of cameras and lenses.

This camera is magic for those who are professional photographers and are seeking to work even more in the photography segment. The All Modern Flagship APS-C model K-3 III continues a legacy of workmanship paired with today’s new technology, based on basic values of enthusiasm for photography.

This camera is the most popular in the market and a flagship camera of the brand. It is compact, lightweight, weatherproof, and packed with advanced features that you would want to look for! If you are looking for a professional DSLR camera that doesn’t cause any hole in your pocket and is also packed with all the features you ask for, then this is the camera you should invest in.

GoPro and DSLR cannot be compared as they both were made for absolutely different purposes. Depending upon usability you can figure out which camera you want to invest in.

The latest models of DSLRs are capable of shooting a video in 4k like a GoPro plus they can shoot wide-angle pictures and videos with the use of different lenses and can achieve GoPro-like results. However, GoPro cannot shoot like DSLR. We hope this article helped you make your GoPro vs DSLR buying decision. If budget permits, consider buying both for the best of both worlds!

Note: The hours of operation, ticket prices, and admission criteria of museums, parks, etc. may change from time to time. For the most updated information, we recommend checking the official website of the attraction directly prior to your planned visit.

Fresh From The Blog

Disclosure: We participate in affiliate programs (Amazon and others). We may earn a commission, at no extra cost to you, if you choose to use our links to make a purchase.

www.exploremonde.com is a participant in the Amazon Services LLC Associates Program, an affiliate advertising program designed to provide a means for sites to earn advertising fees by advertising and linking to Amazon.com USA and related Amazon International sites.